Where I Review Hemlock Grove 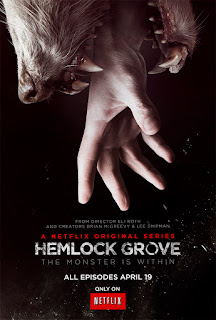 I stumbled upon this series on Netflix whilst being in bed sick all day last week. It is a Netflix original series so you have to have Netflix to check it out. The good news is it can be streamed which was nice because I got sucked in and ended up watching a little over half the series in one day.

Apparently it is based of a novel by Brian McGreevy and can be found here:
Amazon - Hemlock Grove

I did not read the book. I simply just saw it on Netflix, read the description, and gave it a go. I wouldn't say I loved it, but I did enjoy it enough to have to keep watching. Each episode would end and I would immediately be sucked into the next. There are some mild sexual scenes that seem like filler scenes and mild language. Nothing bad though.

Description:
The body of a young girl is found mangled and murdered in the woods of Hemlock Grove, Pennsylvania, in the shadow of the abandoned Godfrey Steel mill. A manhunt ensues—though the authorities aren’t sure if it’s a man they should be looking for.

Some suspect an escapee from the White Tower, a foreboding biotech facility owned by the Godfrey family—their personal fortune and the local economy having moved on from Pittsburgh steel—where, if rumors are true, biological experiments of the most unethical kind take place. Others turn to Peter Rumancek, a Gypsy trailer-trash kid who has told impressionable high school classmates that he’s a werewolf. Or perhaps it’s Roman, the son of the late JR Godfrey, who rules the adolescent social scene with the casual arrogance of a cold-blooded aristocrat, his superior status unquestioned despite his decidedly freakish sister, Shelley, whose monstrous medical conditions belie a sweet intelligence, and his otherworldly control freak of a mother, Olivia.

***
What I liked most about this series was that a lot of the characters where direct references to their inspiration. Shelly, the younger sister of Roman, is in fact named after Mary Shelley the famous author of Frankenstein.  Perfect considering she is a reanimated human.
The plot focuses on Peter (the rumored werewolf) and Roman (the rumored vampire). This isn't your emo Twilight story at all. Hemlock Grove has a gory violence that earns the respect of true paranormal fans. For instance, the scene where Peter "transforms" is disgusting and yet, the best one I have seen in many years. Roman and Peter set out to catch and destroy a rogue serial killer that no one in the town is sure if it is human or something more sinister. Most people suspect it is some mutation from the Godfrey labs in the White Tower. There is a small hint of romance between Peter and Roman's cousin Letha. I liked that it didn't take away from the story. It was just enough.

All in all I give Hemlock Grove four stars. The characters were great and all the actors did a wonderful job with them. If you have Netflix and love paranormal stuff, give it a try.