July 26, 2013
It has been a long and hard road. Over the past year and a half I have written three books and come next Tuesday, all three will be published. Yep, the third and final book in my Nether Trilogy will be available in just a few days. There is a well of emotions that flood through me now.

I'm happy because these books were a dream come true.

Anxious because I want the world to love them as much as me and if they don't that is okay too.

Proud that I never gave up.

And lastly, I am sad. I've never finished a series all the way to publication before. I'm not saying goodbye to these characters, I can't. They'll always be with me. But it will be weird not writing about them all the time. Ava, Devon, Christa, and all the others, I love you. You're all a part of me in more ways then one.

Hey, enough of the sappy stuff and on with the cover reveal right?

I give you Nether Fire: 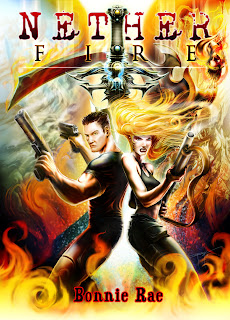 After being gravely wounded by her little sister, Ava awakes in Arcadia and the City of Angels isn't so welcoming. She is, after all, Lucifer's Angel of Death and she has only one mission. Open the portal between Arcadia and the Nether World allowing Lucifer's army to penetrate the gilded walls of Heaven. Too bad Arcadia has other plans. Before she has the chance to set Lucifer's plot in motion, they send her and Devon hurtling back to Earth. Now, stripped of their powers, the two must put aside their differences and race against time to save Christa's soul and the shattered remains of Mankind. If they fail, darkness will rule their two worlds and obliterate what is left of Earth. If they succeed, Ava could still lose everything.
Including herself.
Nether Fire will be available on Amazon next Tuesday, July 30th. To celebrate it's release the first book in the trilogy, Nether Bound, will  be available for free download both Monday and Tuesday. So if you haven't had a chance to read the trilogy now you can start for free.
Nether Bound (Book 1) on Amazon
Nether Soul (Book 2) on Amazon
I can't thank all of the people that have made these books a reality enough. I love you all. I also love all of you readers, fans, CP's, and beta's. You make a writer's world go round. Without you we would be nothing. Thank you, thank you a thousand times and then some more.
Bonnie Rae