The Women Have it, Game of Thrones Recap

Can we talk about last night's GoT? I mean, GO WOMEN! It had to be the most empowering episode for my favorite female characters ever (and there were dragons). I was cheering, jumping up and down, clapping, and acting like my husband does during a football game. The episode was that wonderful and inspiring.

Let's start with Daenerys. I have always liked her. Like all women in GoT she started out as a pawn in the game of men for the throne of the Seven Kingdoms. She was scared, naive, and quiet. Then she stood in some fire, hatched three dragons, and freed a whole bunch of slaves. She now has a loyal army of free men behind her. Dragon babies that would set the world a blaze at the snap of her fingers and men falling at her feet. Dany has really started to come into her own. She's grown up (and so have her fire breathing babies) and realized a few things:
Here is a clip from last night's episode. Every time I watch it I get chills:


Next we have Yara Greyjoy. 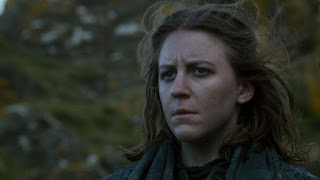 Now, she has been around for a few seasons with small parts here and there. Theon (Reek) is her brother and while he has spent all of his life as someones captive, Yara has been running things on the Iron Islands with her sh*t for brains of a father. Once dear old daddy finally kicked the bucket (murdered by her uncle who all of a sudden shows back up to the islands) she decides to run as ruler of the Iron Isles against her uncle. You think she has it in the bag, but her uncle ends up winning and while he is drowning and coming back to life as King of the Iron Isles, Yara and Theon escape with the entire Iron fleet. Good for them. Their plan? Meet up with Dany in Meereen and join forces. Dany needs ships and Yara has plenty. The deal they strike? Yara has to agree to recognize Dany as the ruler of the Seven Kingdoms. Fine, she has no issues with that. All Yara wants is her home back and maybe a dead uncle or two that opposed her. The only term that makes Yara sad is Dany insists the Iron Isles can no longer pillage, rape, and pirate once Yara is made ruler, but she agrees. Both woman agree it is time for a change in their worlds. You go girls!

Lastly, Sansa Stark. Wow, she has grown on me over the seasons. I'll admit that in the beginning of the books and the show I was not a fan of hers. She annoyed me and I wanted to slap her.  I never imagined she would amount to anything but a whiny do nothing but complain about your life character. For a while that was the case. The, Sansa grew the f*ck up and after the hands of Ramsay's abuse got tired of taking sh*t from anyone in Westeros and beyond.  This chic is hard. She has seen it all. Literally, she watched her dad's head get chopped off and spiked right in front of her. Out of all the women in the books and show she has been the biggest pawn used. Sansa has been married off, passed around, raped, brutally abused, and so much more. There were actually a few times I was worried her character would just end it all herself. She surprised me. She has lost the most out of everyone on this show.
I look at Sansa now and she seems so hollow inside, and yet, the realest character out of all of them. This woman has been through hell and back and lived to tell about it. She has learned the game of thrones and she is putting it into motion. A lot of people speculate that she made a mistake in asking Littlefinger for help with his army. I beg to differ. I know this because when she walked away from Ramsay while he was with his dogs (best scene yet) and she had that little smirk, I saw a new side of Sansa that people need to be wary of.  She knows what's up. She isn't the confused and scared little girl you can back into a corner and threaten anymore. She is Queen of the North and you all better watch the f*ck out because b*tch don't play...


Sansa's request to Littlefinger and the Knights of the Vale save Jon Snow's @ss and the day.

I love GoT and I thoroughly enjoyed last night's episode. The inspiration is real, ya'll. Do you watch GoT? What did you think? What was your favorite part?