October 26, 2016
Today my kiddo got to debut her Halloween costume at dance class. She was super excited. I was nervous, proud, but nervous. Why? Because I make her costumes and she has a mind of her own. Mini Me has never followed the same "princess path" like all the other girls her age. (Don't get me wrong she loves princesses and we have plenty of Elsa dress up costumes). But, when it comes to Halloween she (especially this year) doesn't like all the frilly stuff.

We were walking up and down the aisle of a store that specialized in costumes and I asked her what she wanted to be for Halloween. Since she is older and has a voice of her own I wanted to see what she said. She looked around and said, this stuff is boring. I giggled with delight because we were in the Disney princess and My Little Pony area (all of which she loves when it comes to toys).

I walked her over to the boy section and her eyes lit up. She jumped from zombie to monster with glee. "Mommy these are so cool." I told her she could get whatever she wanted. "I want something scary," she said. "I want to be a spider". Well, they didn't have a spider costume so I told her we could make one. The entire thing evolved into being a "Spider Queen" via her request, but I made it happen. She loves her costume. She loves that it's unique. She loves not being a princess. However, my heart broke when she asked "Mommy, how come the boys get the scary costumes?"

I explained in the best way a three year old could understand that it only mattered what she wanted to be and she was welcome to blur that line in any way she saw fit. Trying to make a toddler understand that society expects women from a young age to dress "sexy" "cute" and "princess" like is terrible. I have nothing against princess costumes. I don't. But, I have everything against costumes that are way too short even at the toddler age. 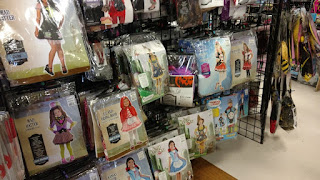 This is NOT okay.
These were the toddler girl costumes...

I a glad my daughter is already noticing something is amiss with this world and willing to take a stand. I get nervous because she chooses to be different and I remember how hard that was for me. What I have to remember is the world we give them will be messed up and people like her will help change it. 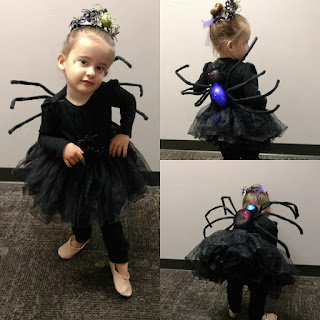 I keep believing they will make the world a better place. Someone has too because there are so many things wrong with our world that if a three year old recognizes this on her own:

Then I can only imagine the things she will see and want to change later on.