The Life of a Therapy Cat

March 27, 2017
The smallest feline is a masterpiece.  ~Leonardo Davinci 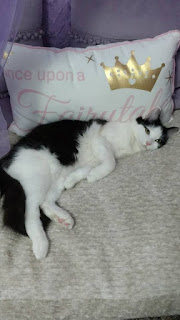 I adopted Lewis from a no kill shelter back in November last year. He was 8 weeks at the time, making him six months old now. I knew from the day I adopted him he was different. His disposition is so relaxed, so mellow, and so loving. He is gentle and a huge cuddle bug. One night when I was clipping his nails (he slept on his back in my lap while I did it) I realized he would make an amazing therapy animal. Even when going to the vet he is unafraid and super mellow often falling asleep in the waiting room. He was born to soothe. Once he hit four months of age I was able to start his training to be a therapy cat. You often see therapy dogs visiting nursing homes and hospital type facilities, but rarely cats. Lewis is an exception. He has been socialized since the day I adopted him. I take him to pet stores often and welcome the public to approach him and be social with the little fluff ball. Everyone loves him to bits.

He graduated a major milestone this month by getting some training in a room full of small kids. Their ages ranged from 2.5 to 5 years old. They were patient and gentle with him (he was a tiny bit nervous at first) but he did great with all the little hands eager to pet him. He stayed calm when the children squealed with delight and he purred when they rubbed him behind his ears and under his chin. I was so proud. We stayed for an hour and visited two different class rooms.

Some of the kids even made him thank you cards. 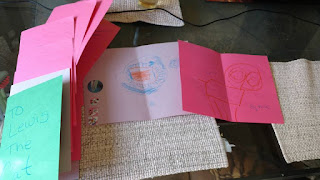 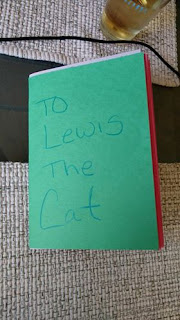 How adorable is that? I am sure Lewis felt like a little celebrity.

Little man gets his official "therapy animal" patch soon and then we can expand our services. It is completely volunteer work because I believe animals can give so much to so many in need of an emotional escape.

As well as being a therapy cat he also loves watching bugs at night through the sliding glass door with his sister Leia and effectively annoying his big brother Loki on an hourly basis. =P 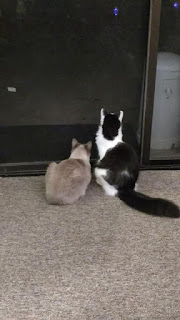 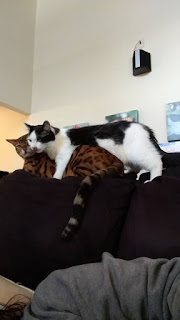 Yes, I am officially a crazy cat lady! I wouldn't have it any other way.